As early as July 19, 2021, UDOT will begin pavement resurfacing on the 24th Street from I-15 to A Avenue and Lincoln Avenue to Washington Boulevard. The project will remove surface defects and increase road longevity by 7 - 10 years. Work is expected to be complete within 30 days depending on conditions.

Plan your route ahead of time and check out the map for detour information and download the UDOT Traffic App! 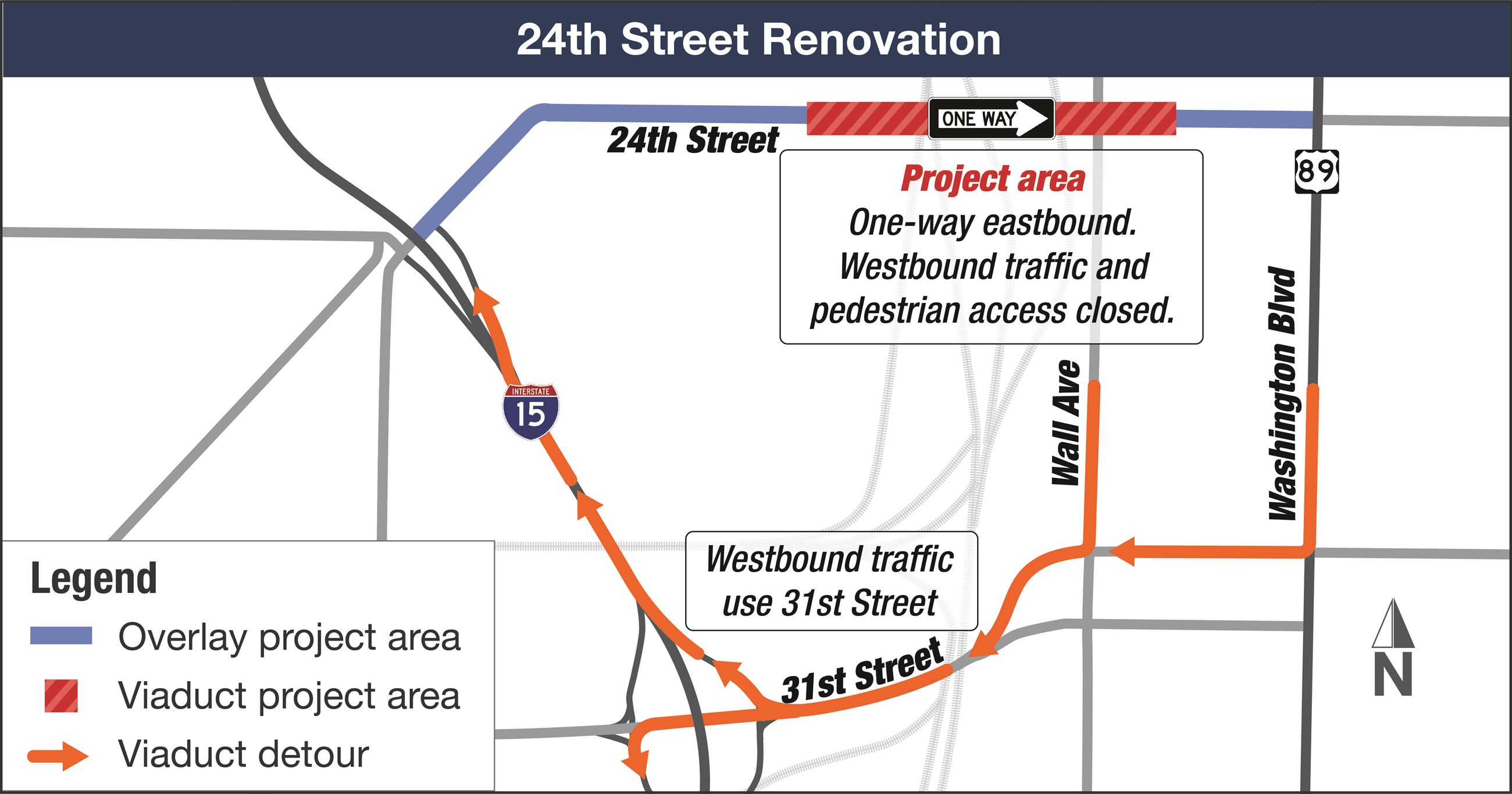 The Utah Department of Transportation (UDOT) is rehabilitating the 24th Street Viaduct from A Ave to Lincoln Ave in Ogden. This project will extend the life of the viaduct for an additional 20 years, improve drainage and enhance pedestrian access by converting stairs to an ADA-compliant ramp.

In observance of the Pioneer Day holiday, no work will take place from Friday, July 23 at 5 p.m. through Monday, July 26 at 7 a.m.

Monday, July 26, the intersection of 26th Street and Lincoln Avenue will CLOSE to north / south traffic for the duration of the project. Please follow posted detours.

Ogden Municipal Building Access will revert back to 27th Street and Grant Avenue on Monday, August 2 for approximately 3 weeks. Please use caution as the access crosses through the construction zone.

Ogden City has a dedicated public information team for this project. Please contact them using the information below.

During the Summer of 2021, motorists in Ogden will see an increase in construction-related traffic.  There are multiple projects happening throughout the city and construction is expected to extend through the summer months.  Motorists are encouraged to use mobile applications such WAZE to help them make informed, on-the-go decisions.

Construction is ongoing for the Harrison BLVD Water Line from 32nd Street to 36th Street. The project is expected to substantially complete by October 1 with some surface work to be completed in October.

Previous Week Summary: Crew switched over services on Harrison BLVD from the old main to the new main.

Current Week Summary: Crews are working today on the final mainline & service line connection at the East side of 34th/Harrison. Residents on 34th Street between Harrison & Tyler will be out of water service until the crews are completed (water is expected to be turned on in the afternoon). Once completed, they will abandon the old line completely (fill with pipe fill), and the new line will be completely tied to the water system. Paving, cleanup, and surface work will occur starting tomorrow. Paving is expected to last through Thursday 9/30.

Week of 9/27 thru 10/1: Crews will prepare to connect the new line at 34th/Harrison after all service lines are switched over to the new line. Concrete work will be scheduled and final paving will also be scheduled afterwards.

After 10/1: Mill/overlay is tentatively scheduled for October 20, 21, & 22. Outstanding concrete/landscape restoration will happen between 10/1 & 10/20. Once the mill/overlay is completed, concrete collars for valves will be poured.

If any concerns or questions contact: Public Involvement Hotline 800-292-3557. 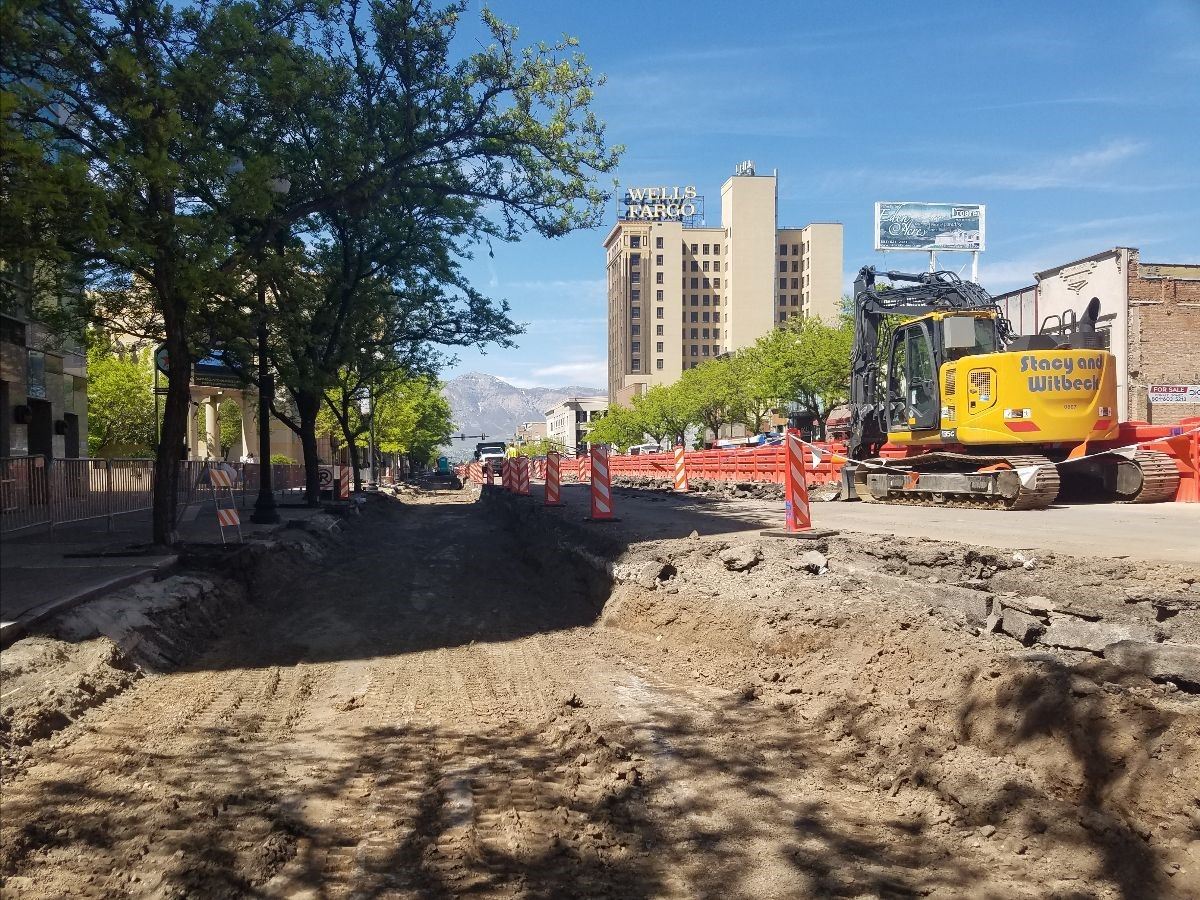 In observance of the Thanksgiving holiday, construction activities will be suspended Thursday, Nov. 25 through Sunday, Nov. 28. Have a happy and safe holiday weekend! 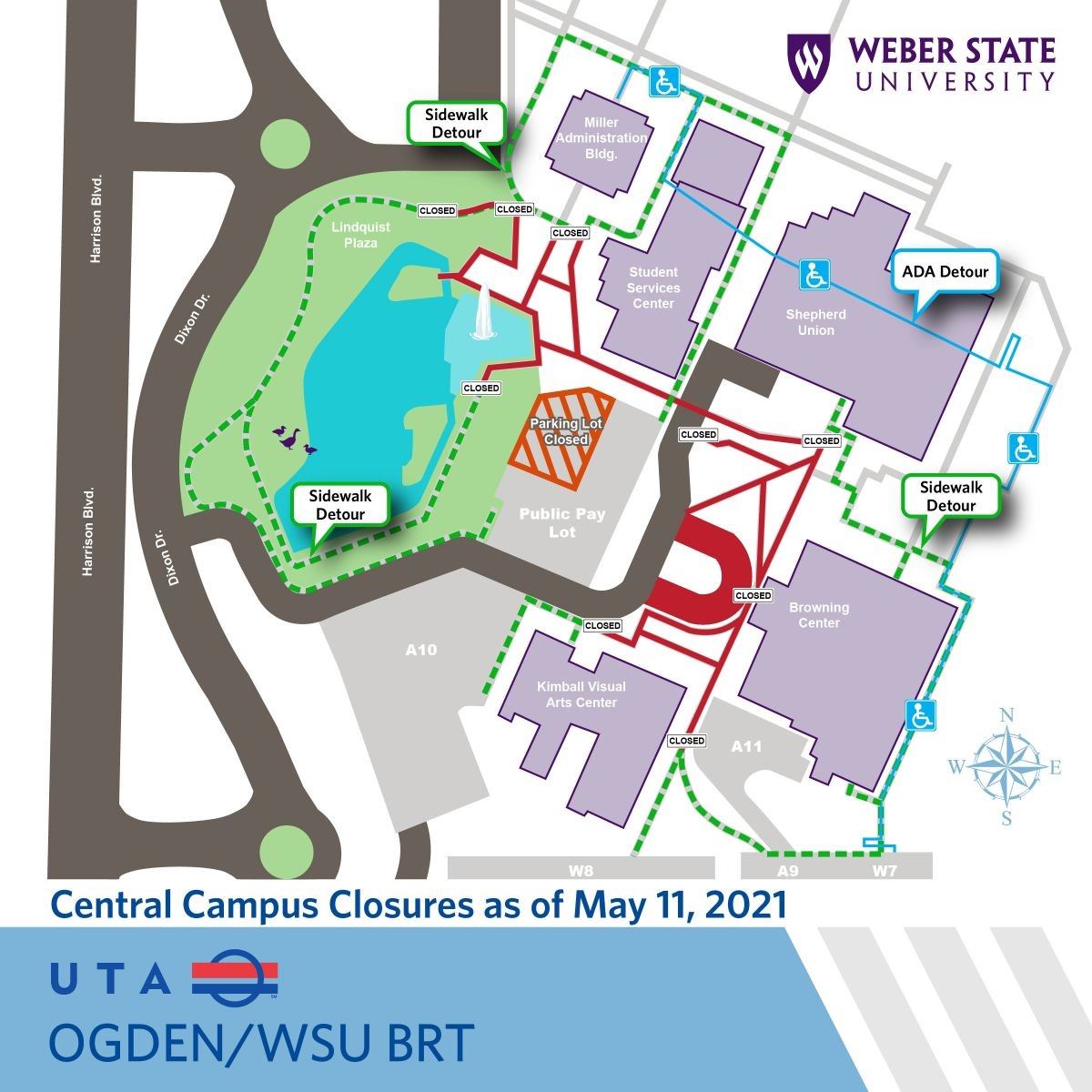 More information is available by calling the City's project hotline: (800) 292-3557 or emailing marty.asay@wcg.us.

The Utah Department of Transportation will implement a full closure of Ogden Canyon on Sunday, October 3, 2021, 6 a.m. - 3:30 p.m., for roadside maintenance, ditch clearing, barrier repair and other work. The closure will affect the full length of the canyon. Motorists should plan to use alternate routes. 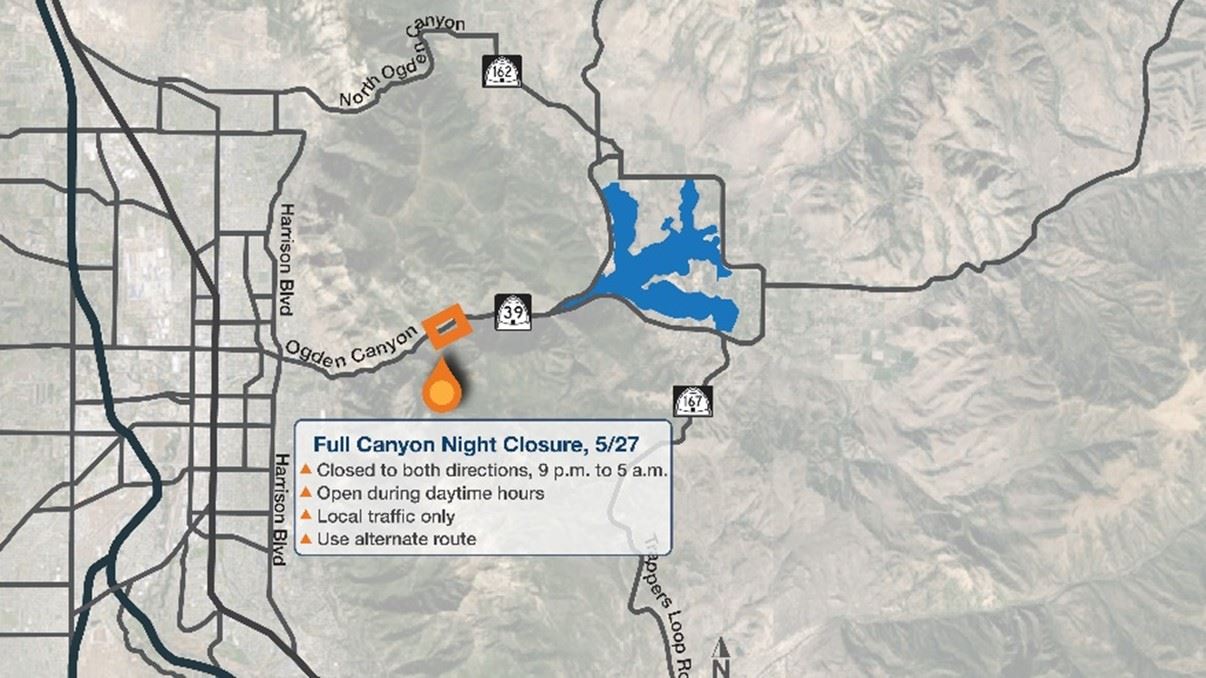 Construction has begun to replace the mid-canyon bridge along SR-39 in Ogden Canyon. While the project progresses, crews are working to improve traffic flows in both directions in the canyon. As the weather warms up and recreational opportunities open at Pineview Reservoir, an increase in traffic and congestion in the canyon is expected. Motorists should expect significant delays during peak morning and evening travel times. UDOT advises motorists to give themselves extra travel time for their commute and recreational outings or use alternate routes when possible.

This project is a continuation of UDOT’s project to rehabilitate three bridges in Ogden Canyon. The mid-canyon bridge will be replaced with an improved bridge that will last 75 years. Work will continue through fall 2021.

Speed limits in work zones are reduced. Motorists should exercise caution while traveling through work zones, heed construction signage and take alternate routes when possible. Plan ahead by checking traffic conditions at udot.utah.gov/traffic, or by downloading the UDOT Traffic app. 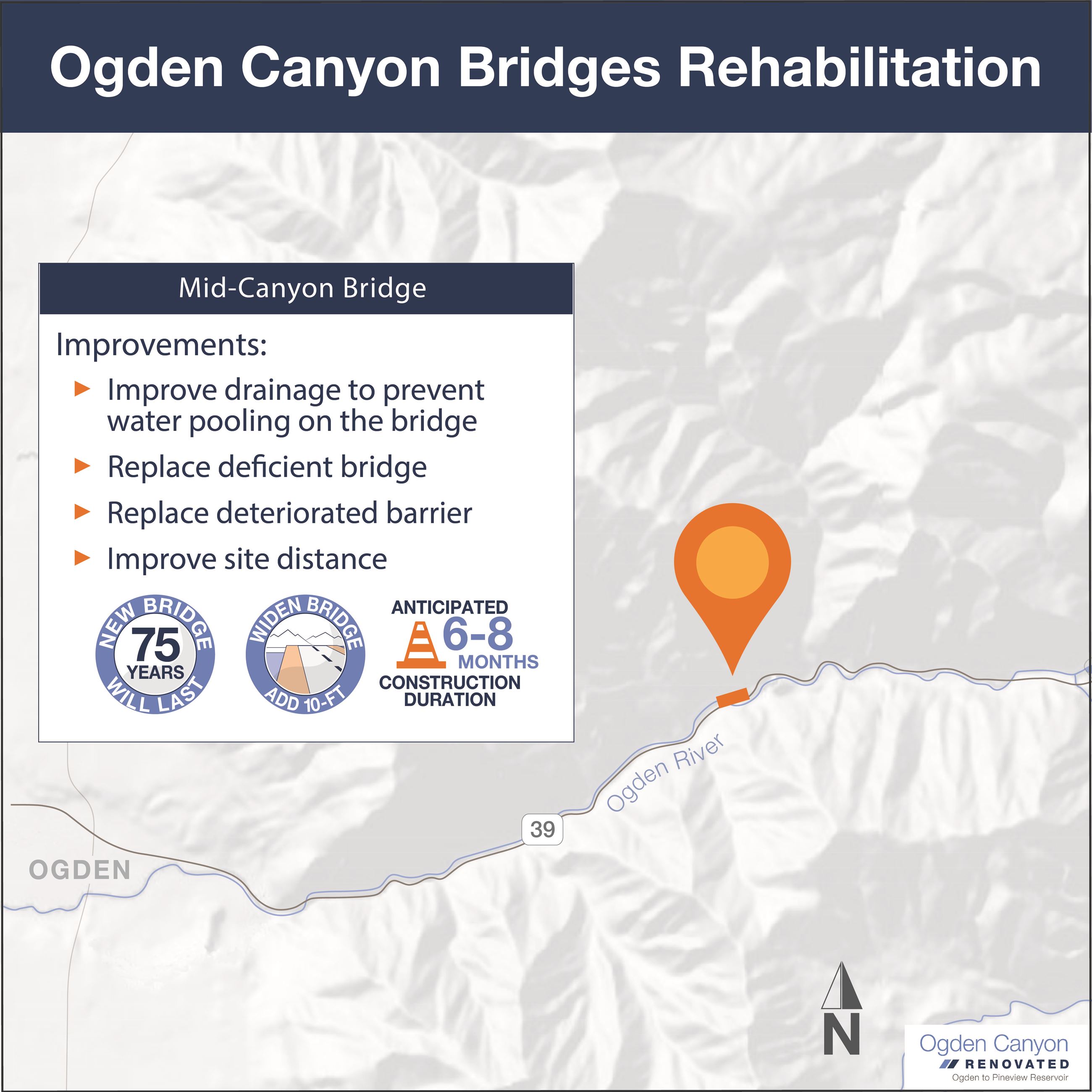 UDOT to Repave US-89 from 40th Street to 22nd Street on Washington Blvd. 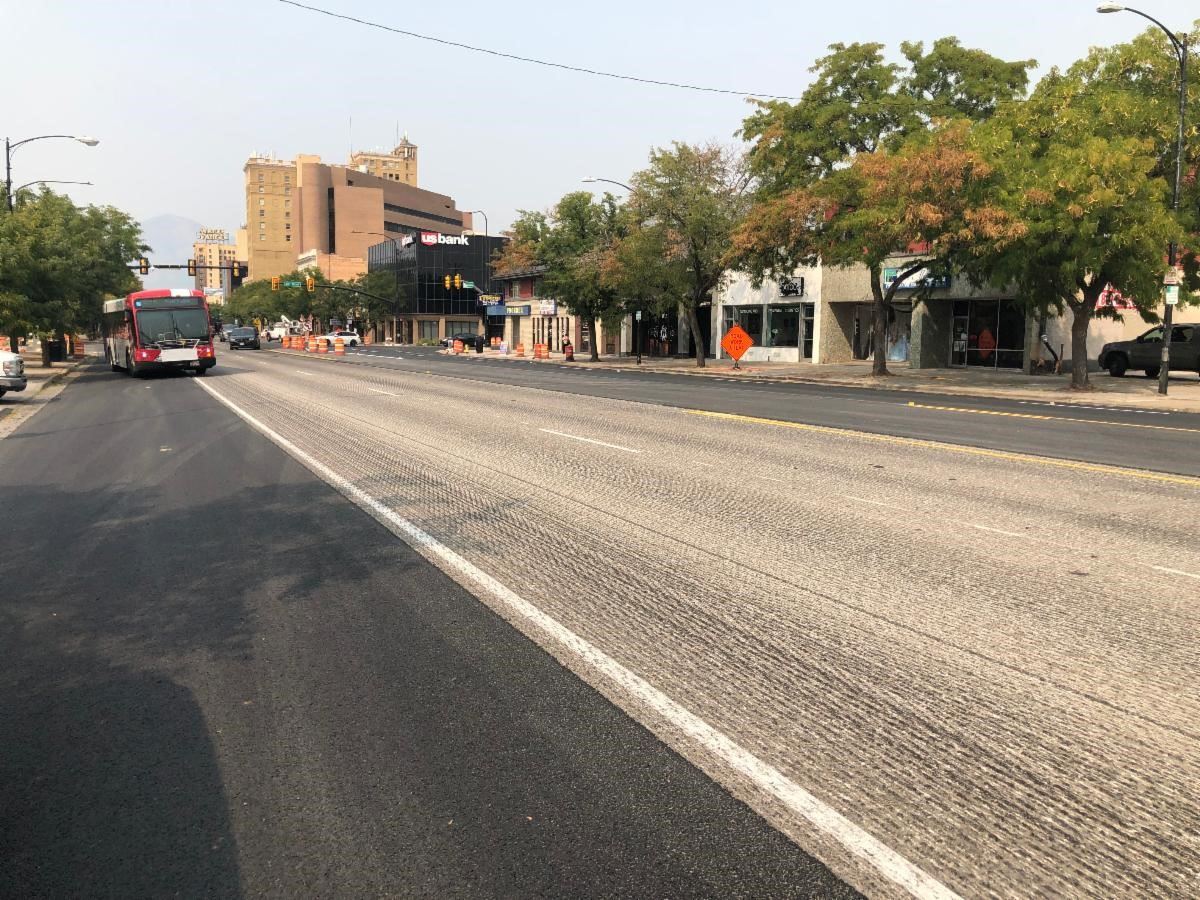 Work will take place between the hours of 7 p.m. and 7 a.m., up to seven days a week. Nearby businesses and residents should expect increased noise and vibration associated with construction during these hours.

On Monday night, July 26, the Utah Department of Transportation (UDOT) will begin a project in Ogden/South Ogden to repave US-89 (Washington Blvd.) from 40th Street to 22nd Street by removing and replacing the top layer of asphalt. This will improve the ride and help keep this pavement in good condition for a number of years. This project will also help tie in the work that was done by the Ogden BRT Project. Additionally, crews will replace sections of curb and gutter, and replace various pedestrian sidewalk ramps along the project corridor to bring them up to current standards. This project is expected to reach completion in mid-October.

To minimize the impact on the traveling public through this highly utilized corridor, the majority of the work will take place at night, between the hours of 7 p.m. and 7 a.m., up to seven days a week. Motorists should expect intermittent lane closures, intersection closures, lane shifts, and delays of up to 15 minutes during work hours. Uneven lane conditions are possible outside of work hours.

*Patrons and employees of businesses along the work zone should avoid parking on the street.* 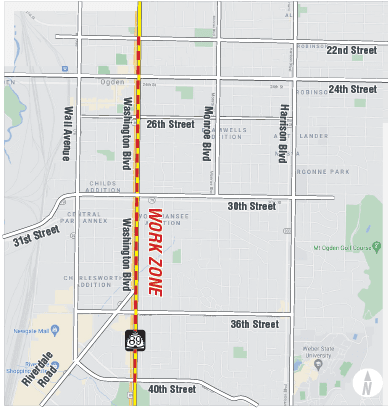 For your safety, as well as the safety of those working in the area, please use extra caution and stay alert while driving through construction zones. Nearby residents and businesses should expect increased noise, dust, and vibration associated with construction. Construction schedules are subject to change due to weather or other unforeseen circumstances. If you have questions or concerns, please contact the project team at 877-495-4240 or via email at udotregion1@utah.gov. Sign up for email updates by sending us an email with “US-89 Updates” in the subject line.